It’s been a quite long pause already. My Estonian life isn’t so interesting as Californian. Most of my days I have to attend school and this week has been hell because I had/have so many homework dues. Finally can concentrate a bit more in the lectures but this is still a bit hard.
Because all of the hard stuff and some negative energy I got here I am officially homesick. And by home I mean San Diego, my house, roomy and my friends. Never happened in San Diego!! But it will get better I hope. And I have some future plans that I will tell when I am more sure of them. These plans keep me going forward right now. Plus my two best friends here.
But in the meantime I have gone out some nights. Drinking here and there. Got a chance to earn some extra money that I need right now for my future plans. But working with mean and negative people is really hard.
And my faculty had a big party for the new students. It was quite fun because before the party they had assignments all over the downtown Tartu. I was in one point where they had to collect money from strangers on the street without saying a word. The results were quite impressing!! The party was a costume party and the theme was who you wanted to be as a kid. My idea was brilliant and I went there as a groupie/slutty rock-star. 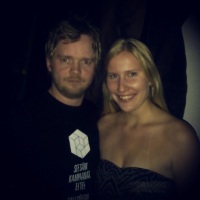 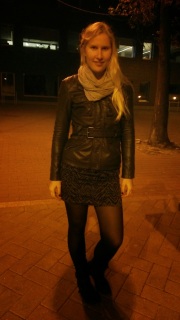 Beside all the drinking I have been doing here I also have been walking a lot!! Can’t just sit all day. But it gets so cold outside. At night I am wearing a hat and coat and gloves and all the other stuff cause I’m freezing!! Same time my girlfriend wears only a jacket and no gloves and stuff. 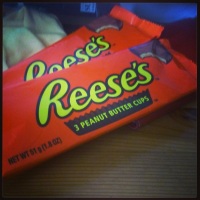 And we have now Reese’s in Estonia and the Oreo cookies too. I will be okay now here. And the other picture is taken in restaurant Pierre and this is a chocolate-cheesecake with ice-cream. This is the best!!